Traffic restrictions around the Twisted Oak

It’s great that we live surrounded by countryside, with dark skies and yet we are an easy walk or cycle from the city centre facilities via Little John’s Cross Hill, or Balls Farm Road. This is a rare privilege. We also enjoy several country pubs like the Twisted Oak, which we must support if we are not to lose them.

For many years there has been a large amount of traffic using Balls Farm Road, Little John’s Cross, Doctors Walk illegally as a rat run, causing problems on Balls Farm Road which is very narrow with poor visibility, and Little John’s Cross where there are steep banks, no footpaths and high traffic speeds. In 2013 this was already a problem which had involved police and Council action, including the introduction of the timed restriction on Doctors Walk. In 2013 members of Ide community started doing traffic surveys. By December 2017 surveys showed 158 Vehicles per hour on Little John’s Cross Hill and 102 on Balls Farm Road, almost double the rates recorded in 2013.

Local councillors have had many reports of people who walk and cycle experiencing difficulty with the continuous stream of illegal vehicles, encountering verbal abuse and threatening behaviour from motorists and being forced off the road into the hedges and bank. This includes children from Ide walking and cycling to West Exe and other schools. Around 2015 there was a serious incident on balls Farm Road where a dog walker was struck by a vehicle and hospitalised.

People who walk and cycle were being discouraged from using these routes and forced to drive instead.

In September 2020 Devon Highways introduced a temporary closure of Doctors Walk to address these issues.

Drivers can use Balls Farm Road and Little John’s Cross Hill, to access the Twisted Oak pub and the Ide primary school walking bus, but it is not legal at any time to use these roads to access West Exe School or as a short cut to avoid congestion on other roads.

Brown signs have been added directing traffic to the Twisted Oak via Little Johns Cross Hill, and we encourage people to continue using the facilities here.

At the entrance to Doctors Walk signs show

All other vehicle routes accessing this area have; 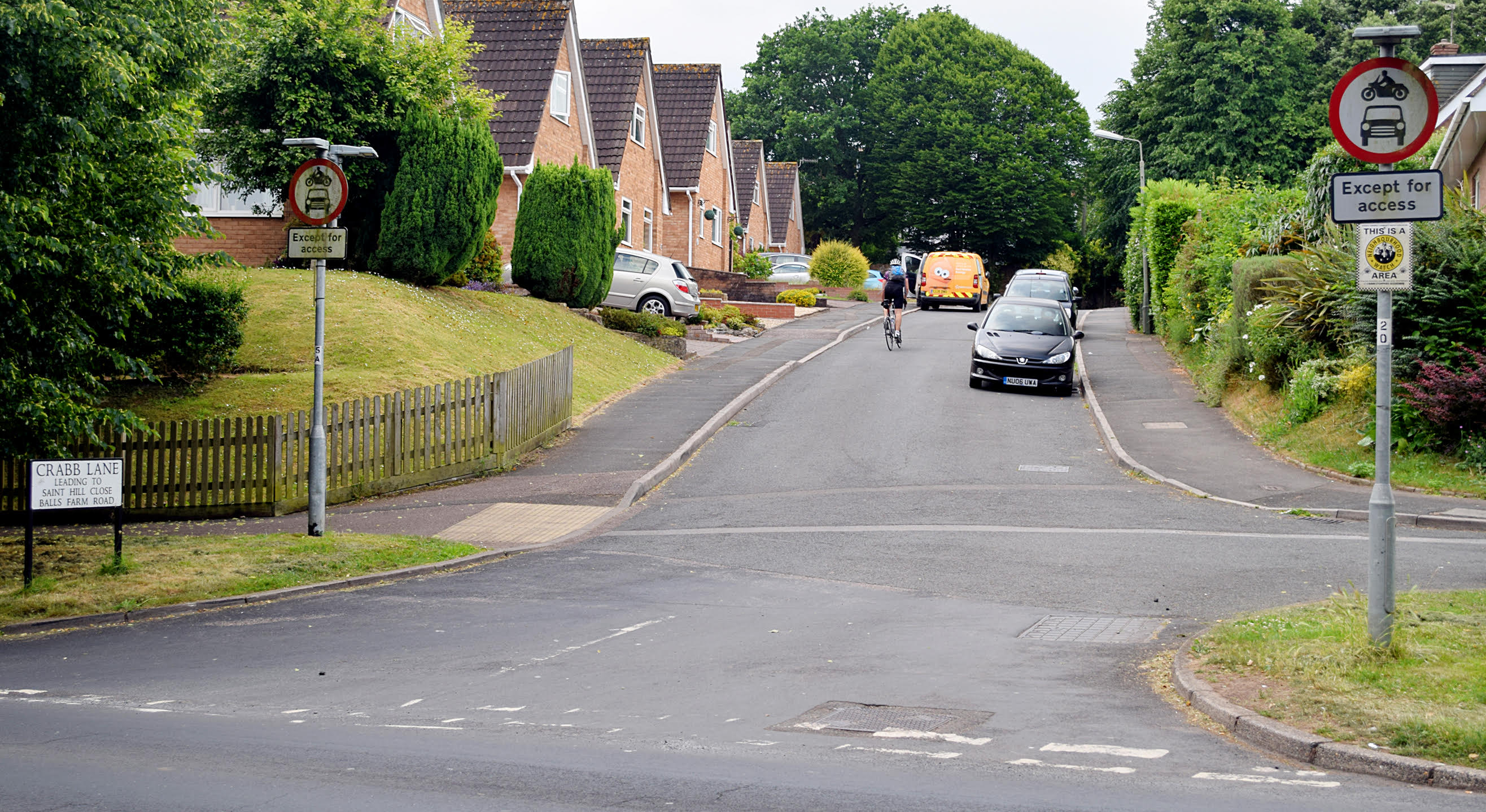 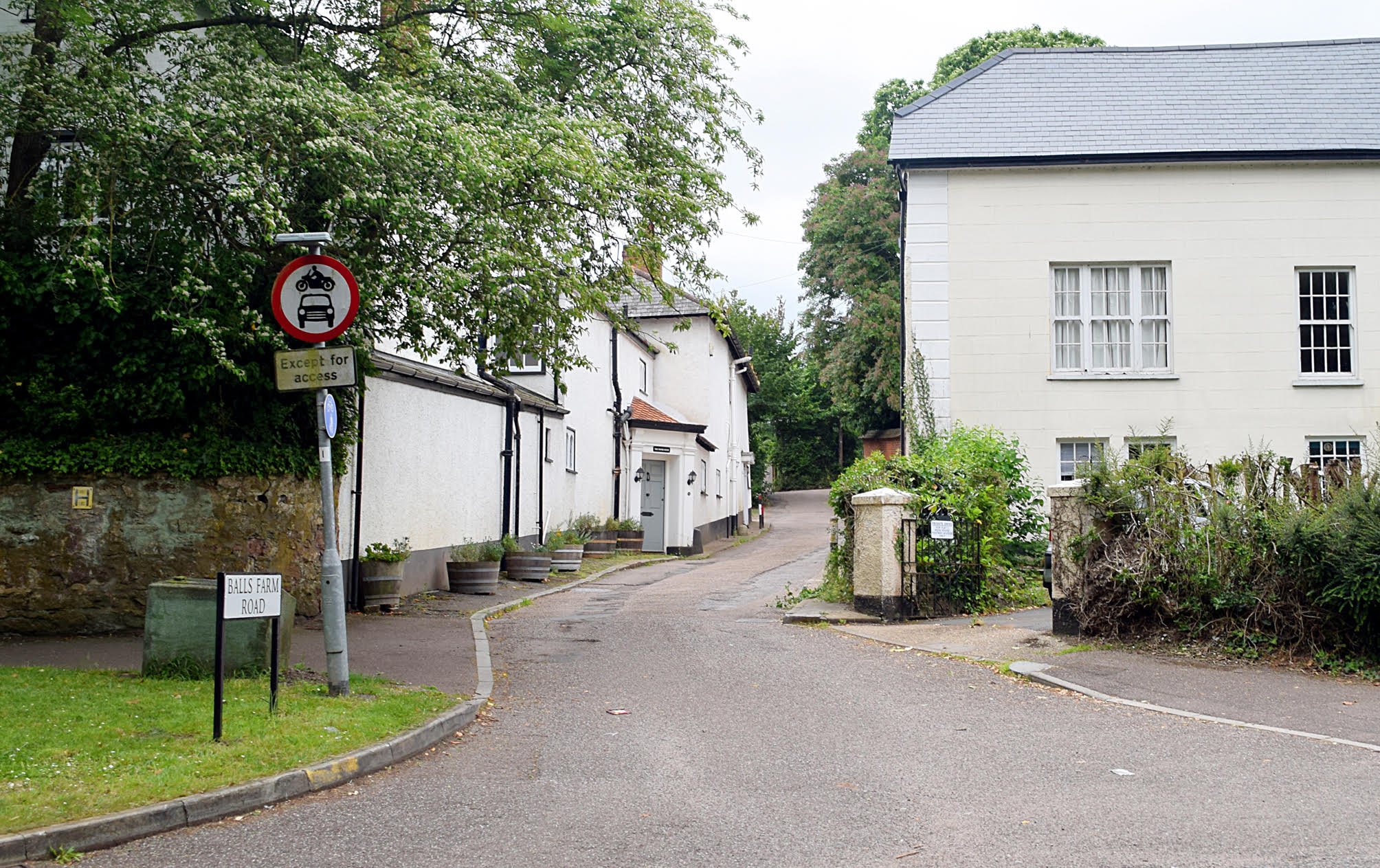 All the restriction signs are present and visible.

Highways recently informed us that where there is no pavement (for example on Balls farm Road) all road users have equal rights and there is no requirement for any group of road users including pedestrians to give way to any other.

On a single track road, allowing following traffic to overtake is a courtesy and not a duty.

Does that sign mean ‘beware of low flying motorbikes’? No. It means No motor vehicles. It is ok to use these roads if you are walking cycling or riding a horse.

West Exe School is outside this access restriction so we are not allowed to use Balls Farm road as a shortcut to drive to West Exe School.

It is illegal at any time to use Little Johns Cross Hill and Balls Farm Road as a shortcut to when driving elsewhere in Exeter.