12th meeting. A summary of all the responses to the questionnaire was placed in the November 2014 Ide Times. In order for parishioners to follow our progress a timeline was published on the Ide Parish website containing details of our discussions and decisions.

Winter Meetings These meetings were taken up with the actual content of the plan. Steering Group members were assigned tasks relevant to NP Contents headings. These inputs were then written into the initial draft plan to be presented to Clare Blaney, Strategic Planner at Teignbridge DC in order to check its content and relevance to the task. As a group, were were concerned that the document should be readable and readily understood.

11th meeting. The purpose of this meeting was to establish the content of our Neighbourhood Plan and having been decided, we decided that we need to begin writing some of the content. Some of these sections will be easier than others and there will be probably further need for feedback from parishioners but a start needs to be made nevertheless.

10th meeting with Chris Bishop and Peter Pattison. To look at a variety of existing neighbourhood plans and discover any particularly good practise. We discovered that there were very few completed ones of relevance bearing in mind the size of our Parish so it was decided that the next meeting would decide on a suitable Table of Contents.

9th Steering Group Meeting. Appendix 11, email to group members outlining and planning for the next stage and requesting input for feedback to parishioners via Ide Times, Appendix 12. 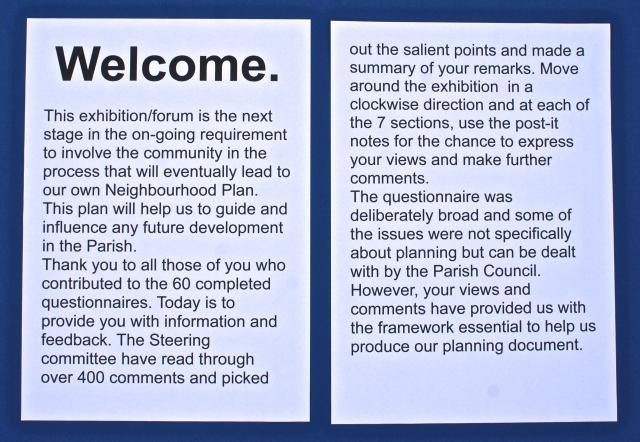 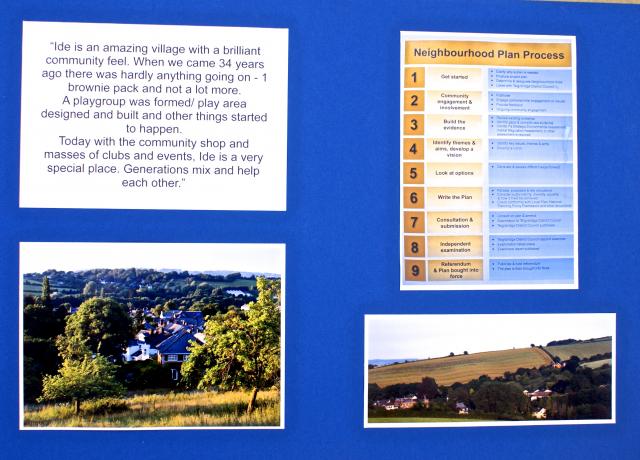 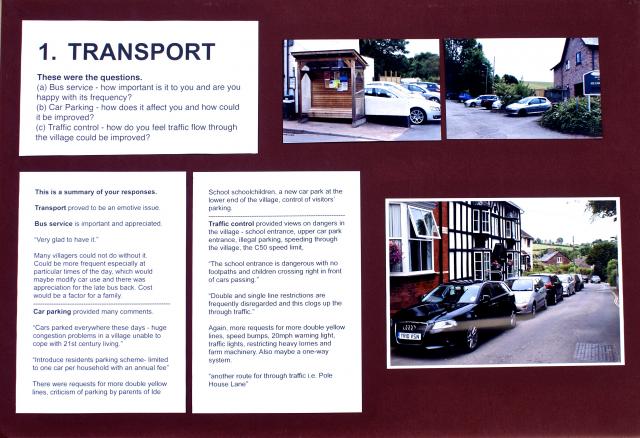 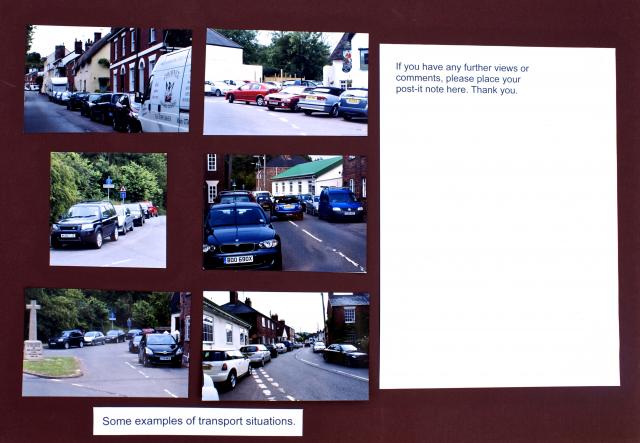 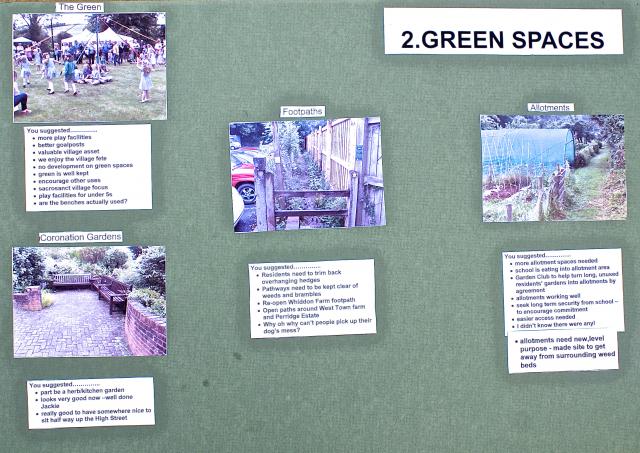 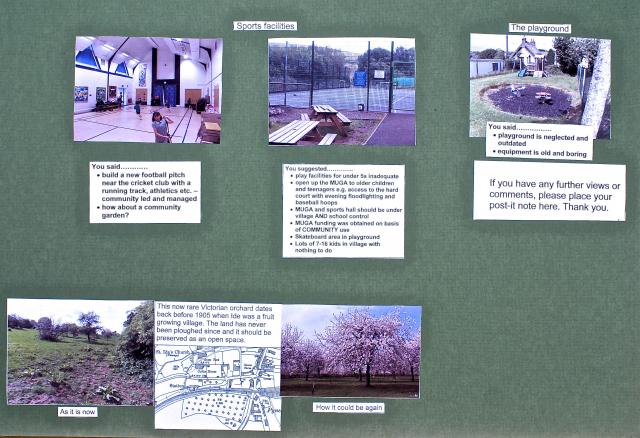 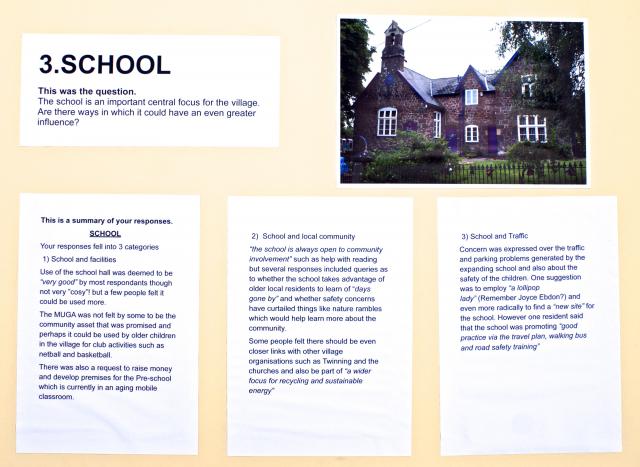 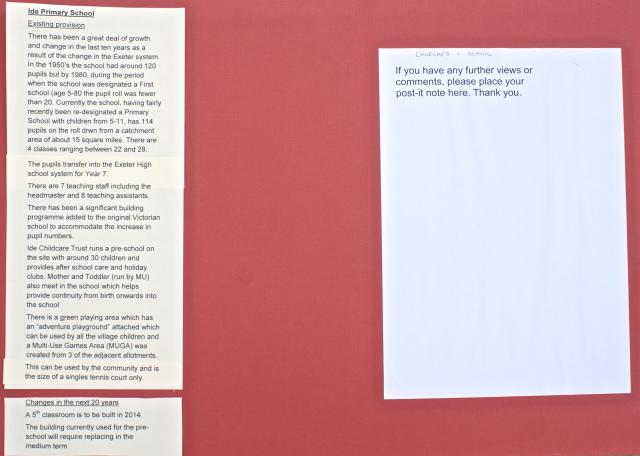 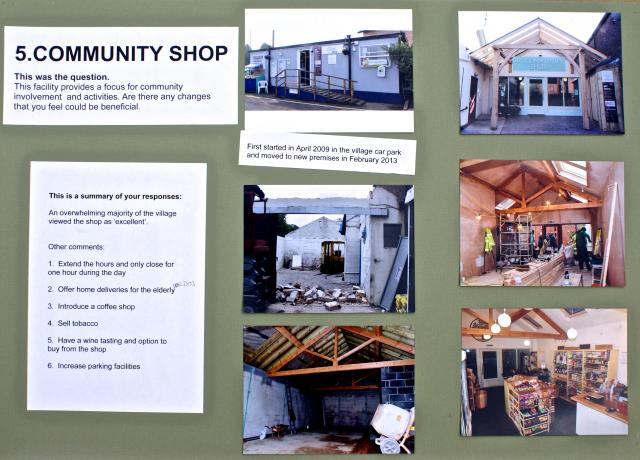 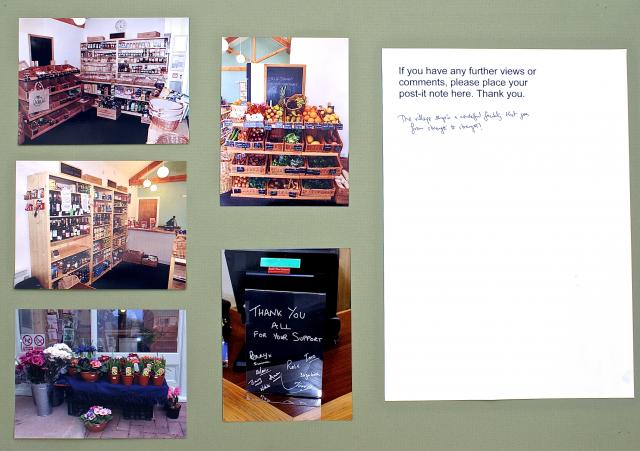 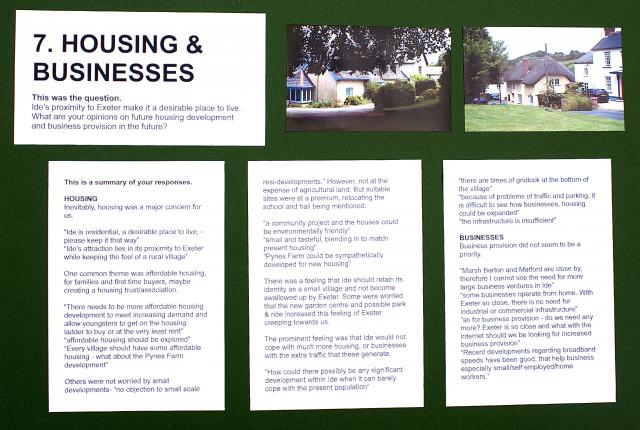 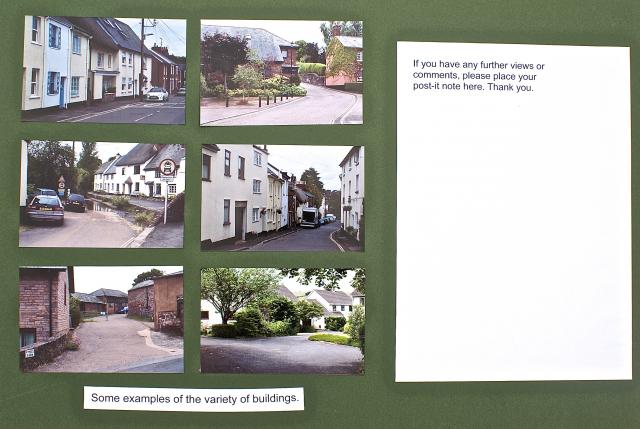 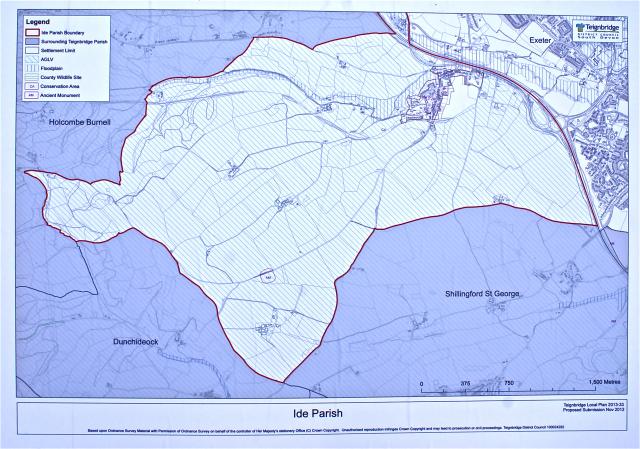 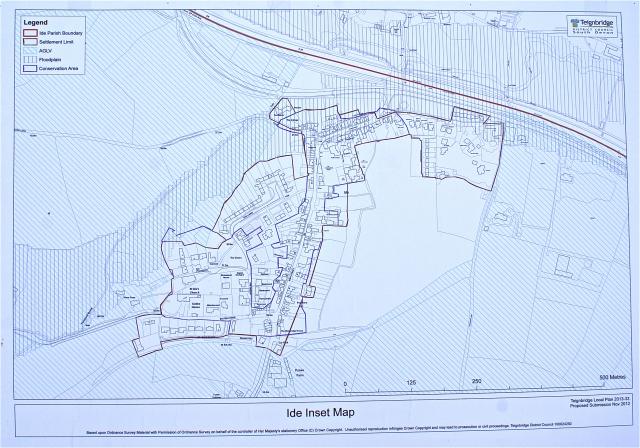 The day was well attended with 97 parishioners visiting the village hall. There was much feedback via the post-it-notes as well as much useful discussion about the issues brought up by the questionnaire. The day was deemed to be a great success, the exhibition providing insight into what Neighbourhood planning is all about and highlighting Ide Parish’s specific issues.

8th Steering Group Meeting during which time all brought our display boards, and we made last adjustments and prepared for the Open forum day. We worked out a rota for the day. 5th July 2014 10am – 4pm.

7th Steering Group Meeting during which time we separated all the returned questionnaires, from 60 households/individuals, into the relevant sections and team members were asked to summarise the comments/responses by the next meeting to be included on their display boards.

6th Steering Group Meeting during which we discussed the arrangement of the hall for the Open forum. There will be 18 screens in total and will be arranged numerically as per questionnaire with large maps of the village and parish and an introduction explaining the process. There will also be space provided for feedback using post-it notes. It was thought that there should be photographs to illustrate our topics and team members were given display card in order to mount their displays of photographs and text. Chris Bishop agreed to devise a poster for submission to Teignbridge’s graphic designer who would produce some large prints.

5th Meeting involving Chris Bishop and Peter Pattison. Having been printed, the 500 copies were addressed based on the electoral roll, a copy for each parishioner, and placed in envelopes. They were then divided up between team members for delivery with outlying addresses being posted. An advertisement was placed in the Ide Times, Appendix 8, about the questionnaire, Appendix 9, its deadline for return and notification about the Open forum/exhibition.

Chris Bishop, Peter Pattison and Roger Luscombe attended a meeting with Clare Blaney at Teignbridge Strategic Planning in order to establish whether our plans were on the right lines, our proposal for an Open forum and any help that she could give re display boards, posters etc.

4th Steering Group Meeting. We examined all the input from all team members and analysed how this could be formulated into a questionnaire. Chris Bishop agreed to devise the questionnaire, and to check its suitability with other team members, Clare Blaney at Teignbridge and the Parish Council.

We then talked about the Open Forum, how it should link to the questionnaire, how all information should be in plain English, not too wordy and to-the-point, how we need to engage with the parishioners and not alienate them. We discussed a suitable date and how we would advertise it.

3rd Steering Group Meeting during which the new members were welcomed and informed about the purpose of the Plan, our progress so far and how we should proceed. It was decided that we now needed to begin preparations for consultation of parishioners. We discussed what would be the key aspects that help to define the Parish and Village. A list was compiled – housing, business services, allotments, green spaces, footpaths, churches and cemetery, school, community shop, village hall, car parking, traffic control, bus service, community leisure facilities. Then each team member was assigned the responsibility to summarise their thoughts about existing provision and future development and to bring them to the next meeting. We discussed the need for an Open Forum day and how this would link in to the questionnaire.

Twisted Oak
Food is served all day from 10AM till 9PM with a Carvery every Sunday starting at 12 noon..